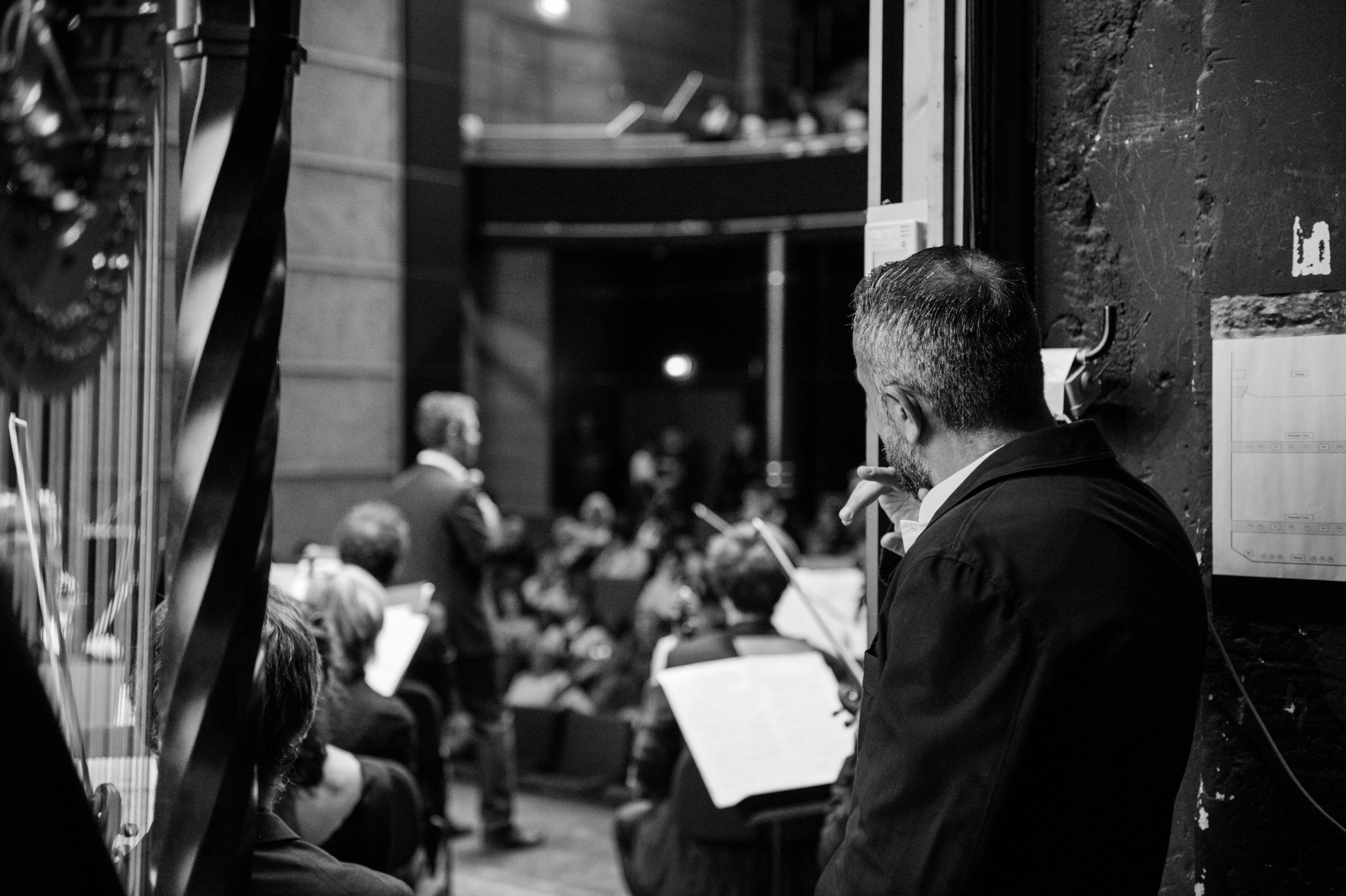 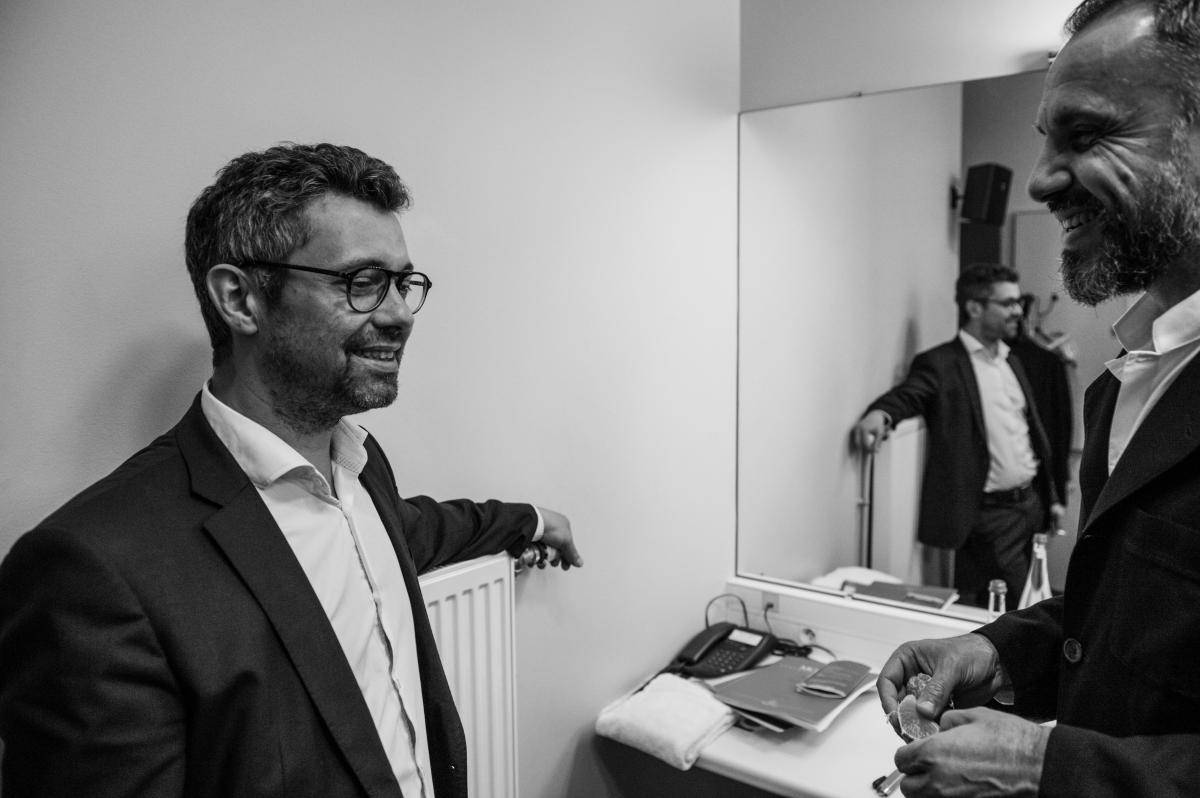 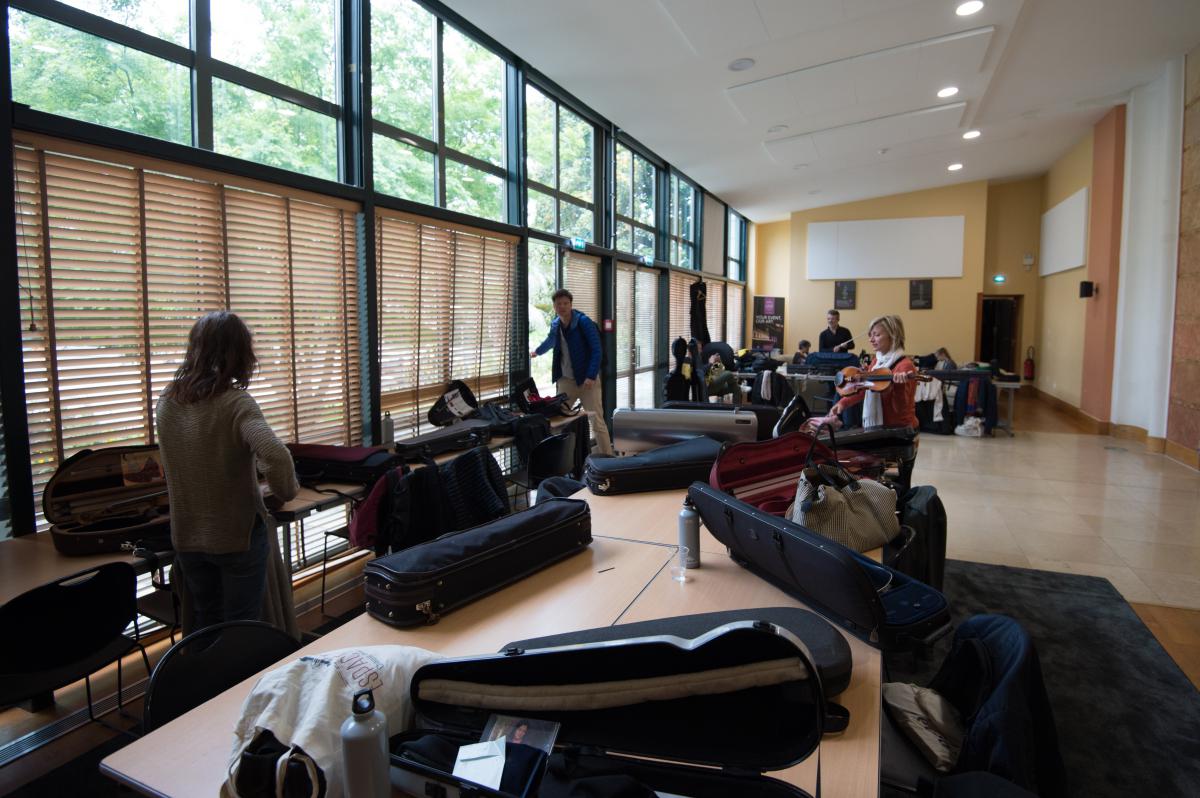 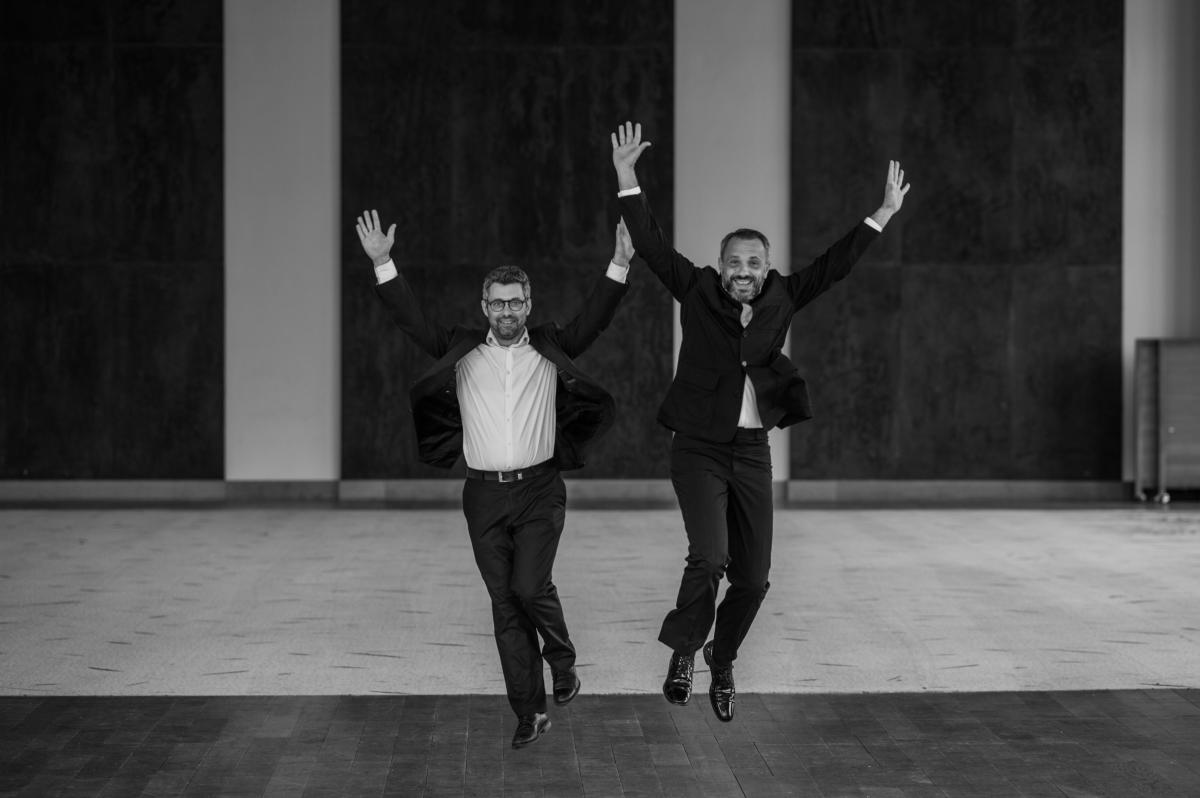 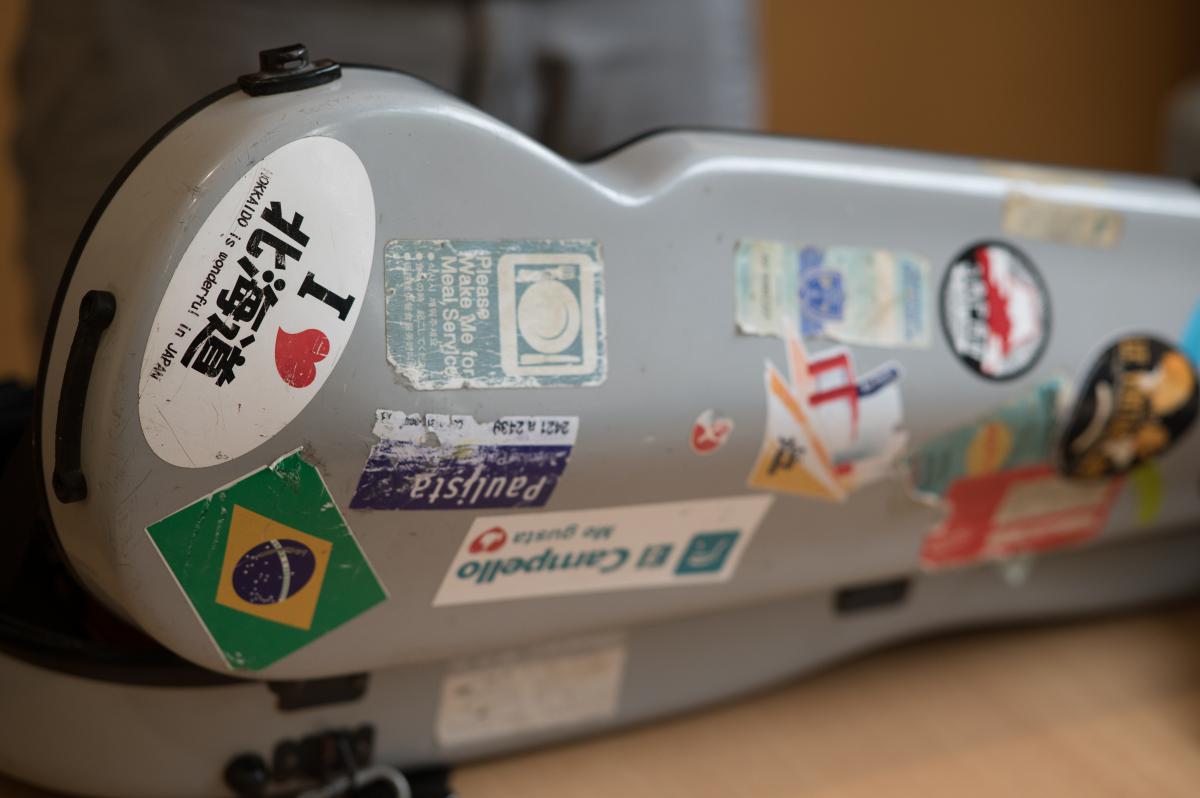 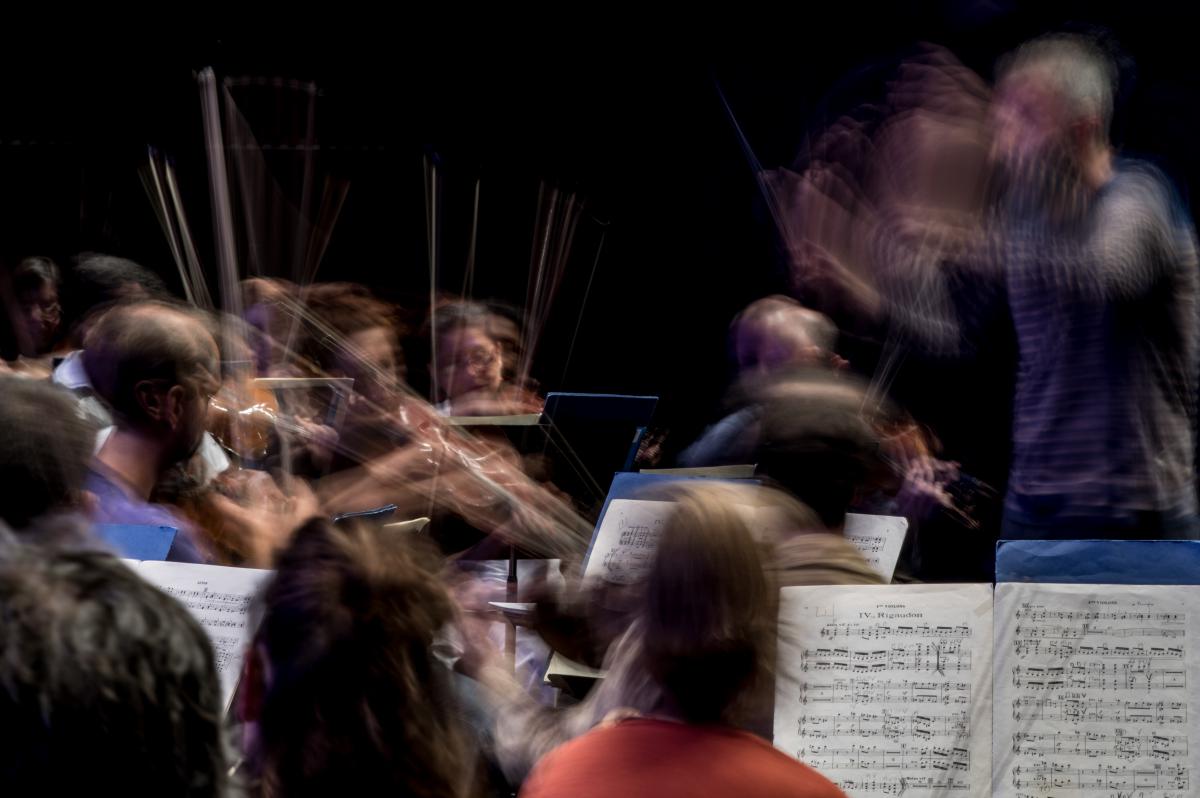 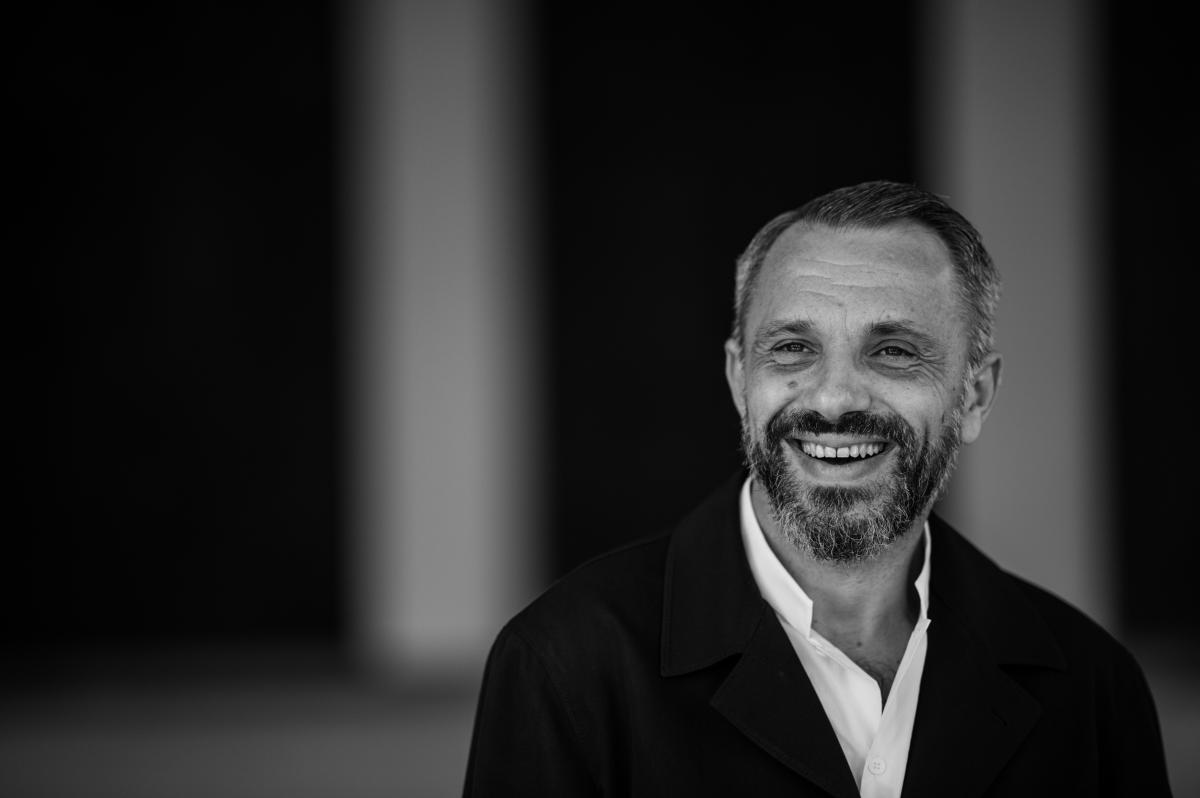 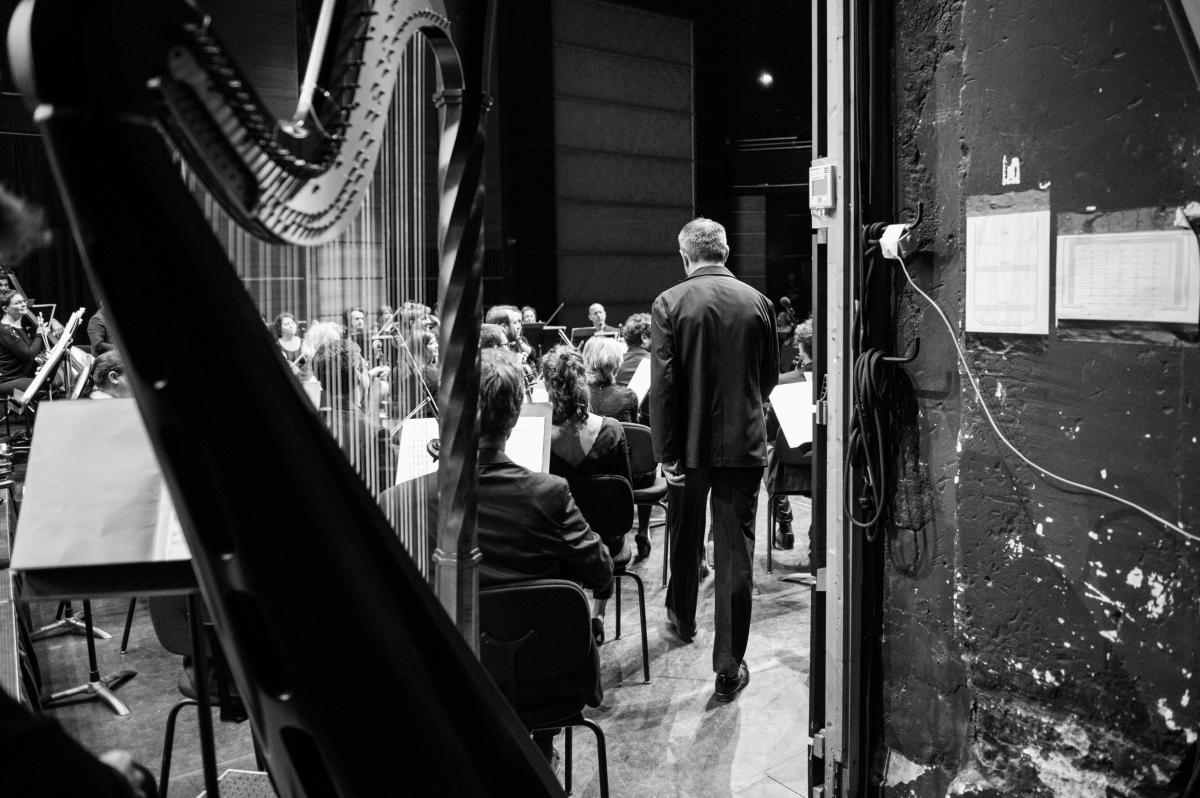 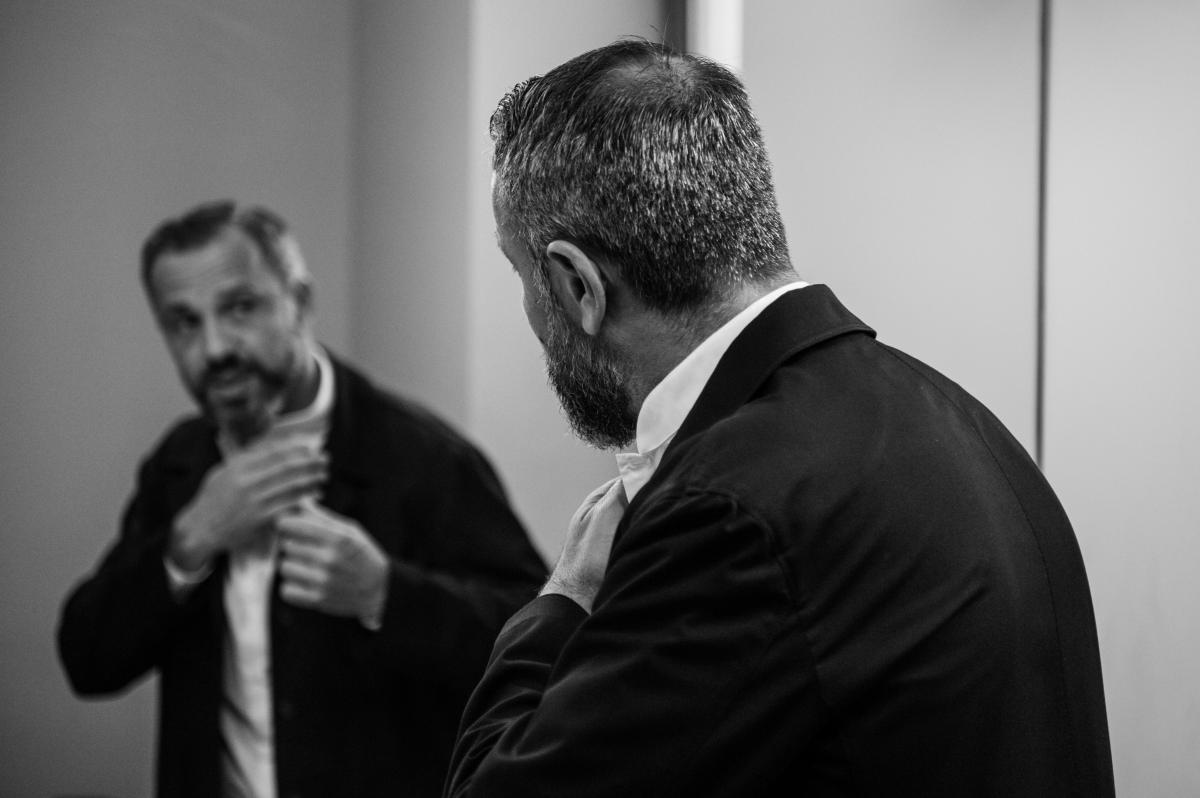 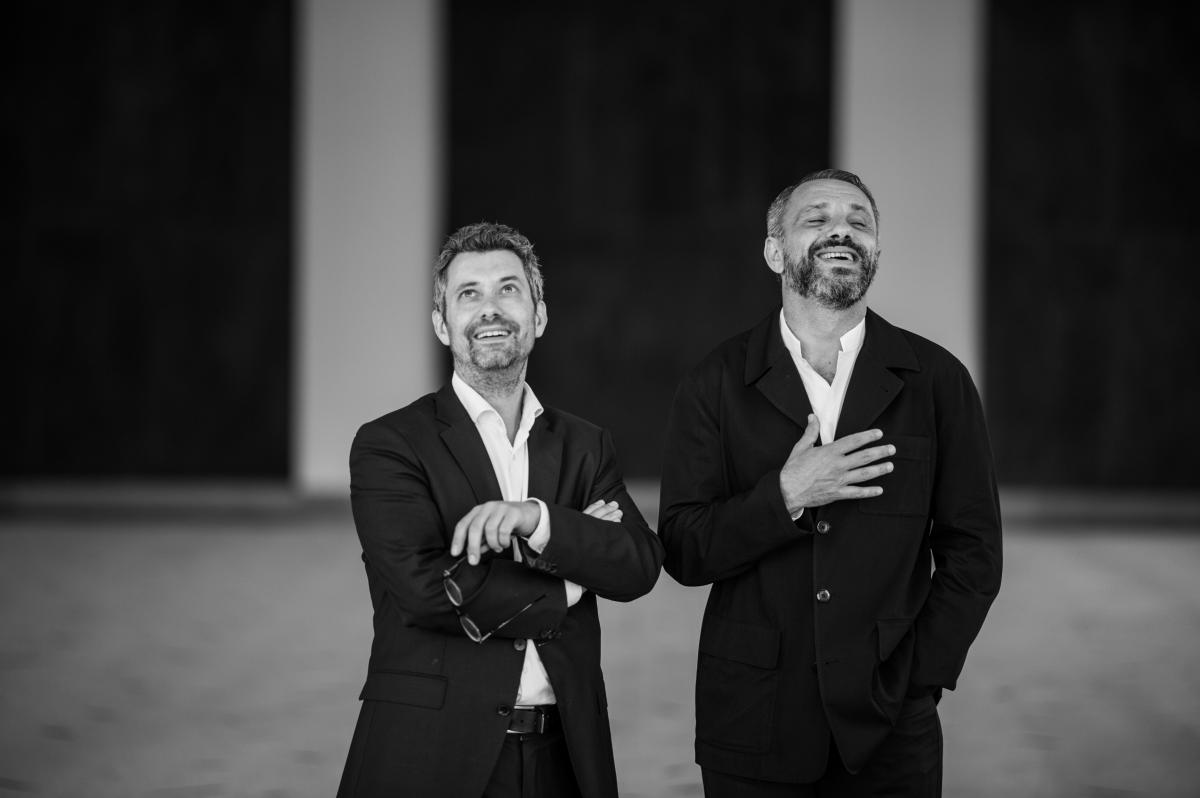 Sonata for the PPB Orchestra

In the very heart of this building, which reflects the prosperity of social life in the early 20th century and is now a conference centre and casino – the Pau Pays de Béarn Orchestra has taken up residence. Wielding the baton are Fayçal Karoui and Frédéric Morando, two friends who virtually grew up together. They share the same vision, the same passion; they sing from the same song sheet, they have the same values, the same empathy for people and the same devotion to their work.

Thanks to their determination, complementary personalities and easy-going friendship, the Pau Orchestra has become a model for others, and Blossom has decided to set its story to music.
We meet them in the bar of the Belle Époque brasserie. They’re relaxed and smiling. These two are to music what Pierre and Gilles[1] are to photography, Yves Saint-Laurent and Pierre Bergé to fashion, or Pierre and Marie Curie to science. Since their studies at the Saint-Maur-des-Fossés college of music, and though their respective career paths took them in different directions, they have always stayed in touch.

Frédéric, a musician and violin teacher who taught for over 15 years, thinks back on his student years.

“I was following the classes given by Marie-Claude Theuveny who dreamed of developing the learning process through collective practice, chamber music and the orchestra. Fayçal, was a pianist, under the instruction of Catherine Collard.”

“A truly amazing piano teacher” affirms Fayçal. “I remember one day, she said something that was to be the most important thing in my life:

‘Playing the piano won’t give you the career your personality needs. Conduct an orchestra instead.’

Catherine Collard was right of course, but there weren’t any courses for that on site.”

And that’s how, at 19 years old, Fayçal came up with the impulsive idea of creating a chamber orchestra with his friends – around twenty of them signed up – and requested permission to practise in the Saint-Maur auditorium. Fred continues: “I was 17 and thought the idea was completely mad. It actually worked for a while until the director, probably out of jealousy, put an end to the wonderful initiative.” On the strength of this experience, the two friends created a youth festival on the Ile de Ré, and moved heaven and earth to play Mozart’s Requiem, still on a shoestring budget and driven by their passion and enthusiasm. They then went their separate ways, each following his own score, but they soon met up again in Toulouse. “I ended up there to work in the Capitole Orchestra,” explains Frédéric. It was the year when Fayçal won the Paris Music Academy prize for orchestra conductors and also received an award in the Besançon competition for young conductors. For his post-graduate studies, he spent two years in the Toulouse National Orchestra, as assistant to conductor Michel Plasson. “So our paths crossed again.” Fayçal probably owes his love of French music to this man whose conducting combines rigorous technique with a poetic approach but deep down, the future Knight of the Order of Arts and Letters[2] knew that he had to blaze his own trail and create his own project for himself.

We’re always creating here
In 2007, when Fayçal was in Pau for a five-year period at the request of André Labarrère, the Fondation Balanchine noticed the quality of his conducting in ballets and his passion for the discipline. He became the musical director for the New York City ballet for seven wonderful years and at the same time he continued his work in Pau with Frédéric, who joined him in 2005. “I knew that sooner or later we would end up working together, because in his absence – Fayçal was shuttling between New York and Pau – the administrative team needed a musician to keep the show on the road!”

And so the two friends were reunited again in 2006, and Fred became his artistic director. “I live here and I conduct elsewhere, it’s a real godsend to work with Fred,” Fayçal says earnestly. “We’re each other’s muse,” says Frédéric jokingly.

“Music is almost a pretext in the way we work together. We use it as a tool.

When we created El Camino, an association to share musical culture at the meeting point between the orchestra and an educational project, we wanted to give children the opportunity to learn alongside orchestral musicians. I taught for 15 years and was sometimes amazed at the lack of instructional and social initiatives. Fayçal and I try to shake up the established codes and take a fresh look at needs and methods.” Fayçal adds: “I have to admit that what was really character-building for me was having the legitimacy to be able to meet people from all walks of life, by taking the orchestra to perform in all kinds of environments. In the space of a day, I can quite easily come across a manager from Total, an MJC[3] events organizer, the Mayor and neighbourhood associations, the board of directors from a hospital or a parent from El Camino. These different encounters help me acquire different and complementary skills and to forge long-term relationships and friendships. For me, living together essentially means doing things together!

There’s no doubt about it, the pair is definitely committed to their public of course, but also to neighbourhood students and children through the El Camino initiative. “We consider culture to be the core of a citizen’s social life, and we’re lucky enough to have a tool that enables us to act on this at a local level.”

There’s nothing routine in what we do
Today the Pau Orchestra comprises 60 musicians, an administrative and technical team of 9 permanent staff, has 2,167 subscribers, involves 6,000 pupils and students and puts on 60 to 70 concerts every year.
The concerts are always a sell-out, and achieving such popularity means selecting pieces of music that people enjoy and choosing talented musicians. Among them are young virtuosos like Tanguy Gallavardin, a 30 year-old solo clarinettist, who has been surrounded by music since his early childhood: “My parents took me to concerts, my sister played the cello.” He attended the Lyon Music Academy at 8 years old and when he turned 18, making a living from what really inspired him seemed the natural thing to do. In 2012 he won first prize in the music competition in Riddes, Switzerland. Playing in an orchestra appealed to him and he joined the French Youth Orchestra in 2011 where he discovered the symphonic repertoire and was later invited to play with the Toulouse Capitole Orchestra, the French National Symphony Orchestra, the Toulon Opéra and the Brittany Symphony Orchestra successively. “One of my friends saw a post on Facebook for auditions for the Pau Orchestra. I went through two selection phases and after that, they hired me. It’s a people-focused orchestra with a family atmosphere, and as we are not hired full-time, we never work to a routine.” All the musicians share his opinion, even the most long-standing members. Karine Léon, a viola player, lives in Toulouse, works in liaison with the Capitol Orchestra library and has been playing in the Orchestra itself for about ten years: “There’s no tension here. We get our timetables well in advance for the year ahead, and in general, we reserve one week every month, which means that we can do what we want with our time outside that.” Karine, who began playing the violin when she was six years old, then went on to the viola when she was eighteen, knows the orchestra well: “I was at the music academy in the same year as Fayçal. Fred contacted me when the orchestra was being created and it’s always a real pleasure to come and join them. I also have a lot of respect for Laurent Manaud-Pallas, who really motivates the string section and gives impetus to the entire orchestra.”

Solo violinist in the Pau Orchestra for over a decade and principal second violin in the French National Orchestra, Laurent has two other strings to his bow: the Simba Octet and the Volta Quartet. His impressive career path led him to play in some of the world’s most famous concert halls and meet the greatest conductors (Daniele Gatti, Kurt Masur, Riccardo Muti, etc.).

The relationship with the audience is crucial

Just by-the-by, his wife, a bass player, his daughter, who plays the violin, and his son, who is a percussionist, also play in the Orchestra. “I’m almost as close to Fayçal as Fred is,” Laurent says smiling. “On stage, I’m his right-hand man, even though I sit to his left!” The first violinist is the most important musician during practice sessions and concerts. In addition to his role as a soloist, he has to keep an eye on his sheet music, can decide on which type of bowing will be used for a given score and has a certain moral authority, as the go-between for the musicians and the conductor.

“I suppose I’m really the one who brings the orchestra together. Relationships are intense which means sometimes sparks fly, but they are always founded on the same passion – the key thing is to always put your heart and soul into the music so that you connect with the audience.” It’s a crucial relationship for an orchestra.

Séverine Longueville, solo bassoonist with the OPPB for fifteen years now, is also a bassoon teacher at El Camino. “There’s something magical about switching from a philharmonic orchestra to teaching underprivileged children to play the bassoon, to be able to play in a crèche, a media library, a hospital or a prison! The Pau Orchestra is multifaceted orchestra, full of conviviality, sharing, music and friendship, a family cocoon where we all gather together to create something beautiful.”

Marie Bedat, solo trumpet with the orchestra since 2009 and a trumpet teacher at El Camino, feels exactly the same way. “I knew the orchestra before Fayçal arrived. Some of the musicians were my teachers at the music academy, but now I’m on the other side of the fence! Fayçal gave a no frills impetus to the orchestra and it’s really nice to be able to run several projects at once.” Alongside that, Marie is the lead trumpet for Scénographe (formerly the Opéra group), is currently recording an album with Yaputo, a Columbian music group and is part of the all-female salsa group Yemaya Banda. And she’s not the only one to be plate-spinning.

The Pau Orchestra is a truly versatile orchestra
Damien Bec, a viola player, joined the OPPB in 2005 after several orchestral experiences “thanks to the friend of a friend.” When he’s not on stage with the Pau Orchestra (sitting close to his wife, a violinist!), he gives viola lessons at El Camino, plays in his folk duet Barribal (who played the opening act for Catherine Ringer at the Zénith concert hall in Pau), runs recording sessions for different artists (Bruel and Willem among others), accompanies Souchon/Voulzy or Andreas Johnson, goes on tour with the Fréro Delavega or works on an indigenous American music project with another friend and musician. “The Pau Pays de Béarn Orchestra is a truly versatile orchestra!” So the gamble has paid off for Fayçal Karoui and Frédéric Morando.

This marriage of two keen and creative minds has succeeded in letting the classical orchestra out of its gilded cage and proving to everyone that French poet Jacques Prévert was right: “Love of music always leads to the music of love.”
[1] https://en.wikipedia.org/wiki/Pierre_et_Gilles

[2] L’Ordre des Arts et des Lettres is an Order of France created by the Minister of Culture on 2 May 1957. Its main purpose is to give recognition to major contributions to the arts or literature.