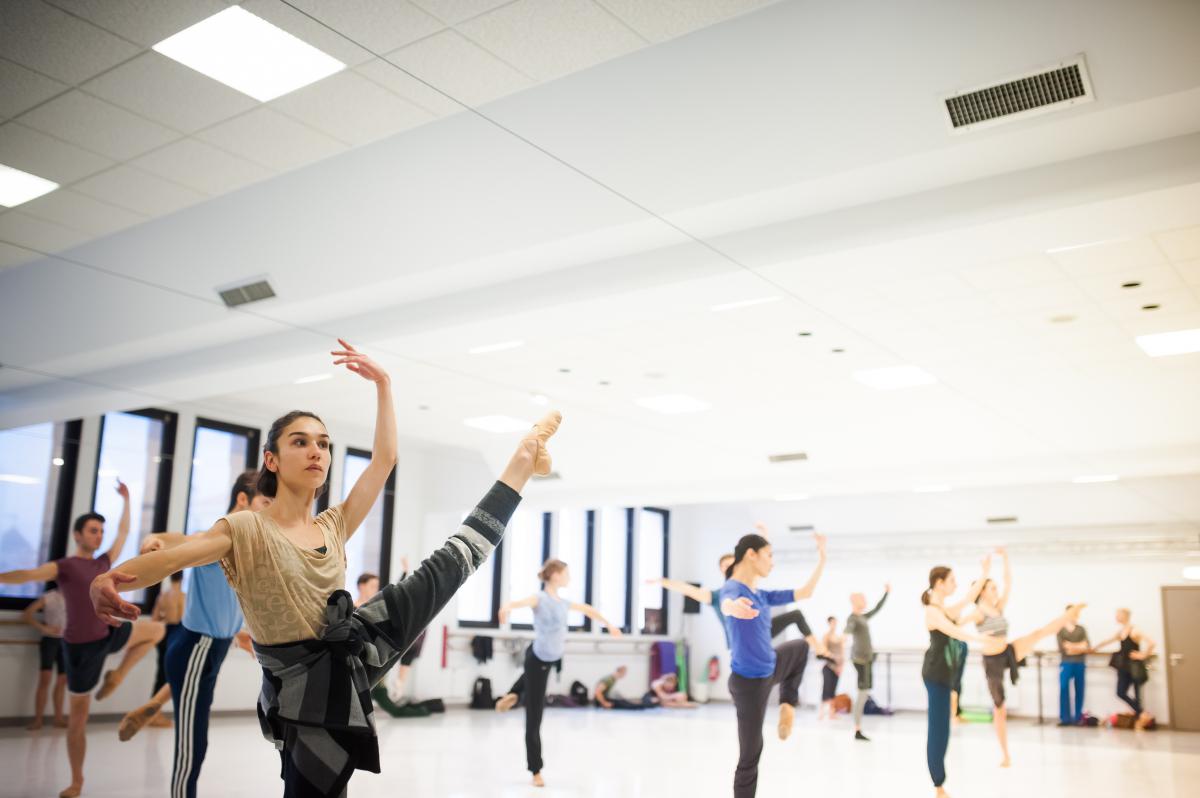 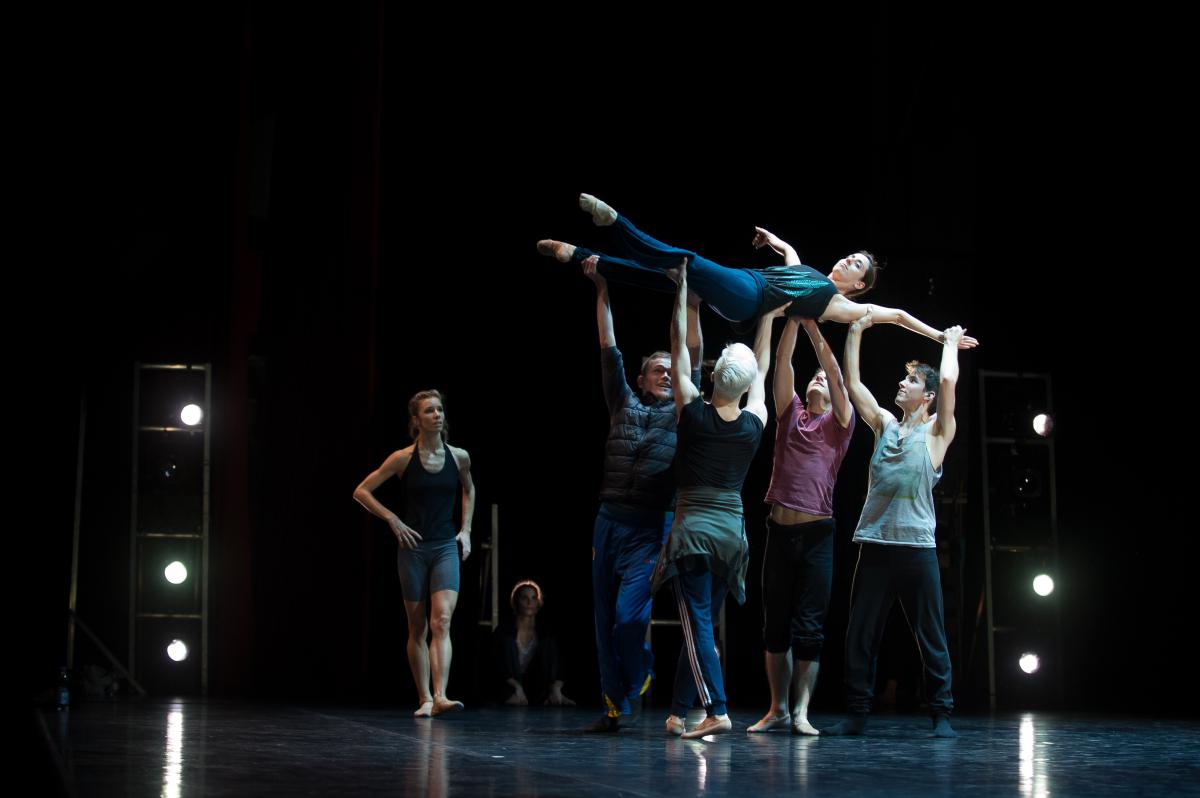 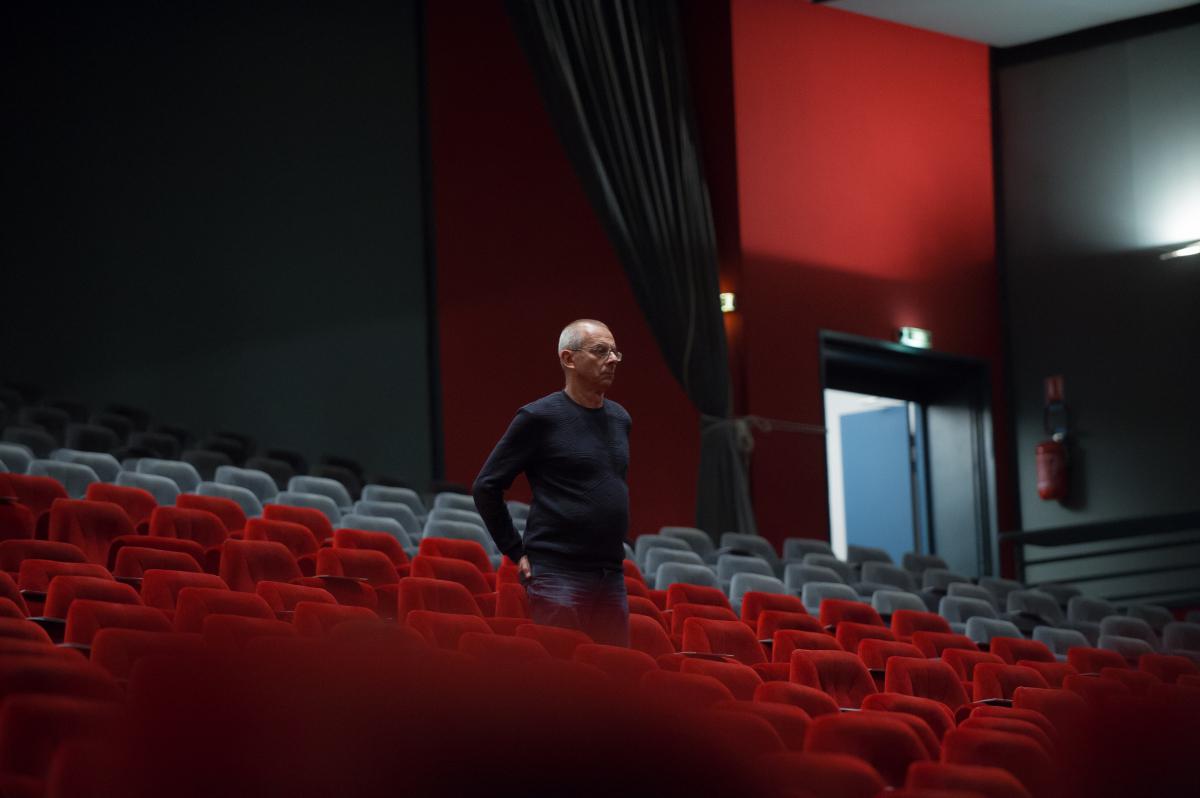 Thierry Malandain is a very soft-spoken man. Sometimes he stumbles over his words, or even stammers a little. “I lack a little self-confidence,” he confesses. Behind a pair of understated, rectangular glasses, he hides a modest shyness and speaks directly, no beating about the bush. In a simple navy-blue jumper, his hand often covering his mouth as if he were apologising for something, he’s an endearing character. Both distant and welcoming, modest and generous. A tortured soul too. And yet he is at the head of one of the most famous international companies in Europe – a pinnacle of achievement for this free spirit who never dreamed that one day he would direct one of the nineteen national choreographic centres in France. The Malandain Ballet Biarritz is a cohort of twenty-two full-time dancers trained in classical and neoclassical ballet techniques, a style that Thierry Malandain holds dear: “Since the 1980s, modernity and good taste were defined by modern dance, and that was that. I am a classical dancer and I have never turned my back on my roots. I studied under some of the most eminent teachers of the ballet world like René Bon, Monique Le Dily, Daniel Franck, Raymond Franchetti and Gilbert Mayer, after my first faltering steps in Vernon with Nicole Sohm. Classic principles are my baseline, but sometimes you have to break the mould.” Straying off the beaten track without forgetting the very essence of what makes classical ballet, is what he has been striving to do ever since he started out as a choreographer – a debut marked by a series of setbacks.

“I didn’t intend to be a choreographer, I wanted to be backstage designing sets and making costumes.”

At just nine years old, the young Malandain found his vocation while watching ballet on Channel on French television. The revelation was instantaneous. “I was at my grandparents’ house and at that time, I thought you could learn ballet by watching it on television. My parents didn’t have a TV set so I asked them to buy one, but the events of ’68 were overshadowing the ballet programmes!” His parents, “who, like many others, didn’t know the first thing about ballet and thought it was just a phase,” finally ended up enrolling the oldest of their six children in the only ballet school in the village. His vocation was clear, but it was too late to try applying to the Opéra ballet school or Conservatoire in Paris. At 17 years old, he was nonetheless taken on by the Opéra de Paris for four months, thanks to Violette Verdy (1) who noticed him in a ballet competition in Lausanne, “before my parents put me on the train for the Ballet du Rhin, where I was ‘sure to find a job”. Still very young, he won three choreographic competitions, but dreamt of joining the company of his mentor, the Czech choreographer Jiří Kylián, and “I told myself that I’d take up choreography if I failed the audition.” And that’s how in 1986, he put an end to his career as a dancer to create the company Temps présent. It started out in Elancourt, then moved to Saint-Etienne as an associate company at the Esplanade Saint-Étienne Opéra. He had a cohort of nine dancers, and six of the nine loyal followers from the past are still by his side today. “It’s the original team. I’ve known the assistant director, Yves Kordian, and the technical director, Oswald Roose, for 36 years now. The ballet masters, Richard Coudray and Françoise Dubuc are the DNA of the company. They have all supported me, believed in me. Without them, I could never have been a choreographer.”

Malandain never says “my” national choreographic centre, or my dancers, but uses rather “we” and “our” , which speaks volumes about the team spirit that has been thriving from the word go. “He carries the cross of ballet,” says Françoise Dubuc, “The fact that we are still here after all this time shows that we trust him implicitly, and we know that the feeling is mutual.” “In his world, there are no loose ends” adds Richard Coudray, “he’s guided by his instinct.” Not surprising then that Thierry Malandain chose these two guardians as sounding boards for his ideas. These masters of ballet are key players. “As well as teaching, we are the buffer and the link between the dancers and management; we do a lot of pastoral work.”Underneath her frosty exterior, Françoise is frank, direct and incredibly demanding when practising her art. It has to be said that this lady, after her debut at the Het National Ballet in Amsterdam, danced several ballets with Rudolph Nureyev as Principal soloist at the Ballet Théâtre Français de Nancy before setting up her own dance school in Pau, and then joining Thierry at the Ballet Biarritz. Richard, cordial, cheerful, and “more diplomatic too,” began his career as a dancer in the Ballet de Nancy. He helped in creating Temps présent,

then joined the Ballet Nacional Chileno in Chile, danced for a few seasons with the Ballet de Nice and moved on to become a ballet instructor for the Hallet Eghayan company, before joining his friend in Biarritz. A complementary pairing that helped Malandain “to prepare the dream and pass on his repertoire.”ONE FOR ALL AND ALL FOR ONE

Just like Dominique Cordemans and her husband Oswald Roose, friends devoted to the Malandain company, “we’re part of its core and have the same artistic sensitivity as Thierry. It has been a great opportunity to promote and develop it.” Dominique, after a career as a dancer with the Ballet Royal des Flandres and Temps présent, is the kingpin of awareness-raising initiatives for different target audiences. “I commentate performances, welcome classes into the dance studios where students meet the dancers or participate in choreographic workshops, and organise master classes open to young dancers. “I want them to feel the demands of creation, of Thierry’s rich, lyrical choreographic and musical universe, set them on the road to a culture.” Oswald, on the other hand, is a self-confessed “man of the shadows” as he likes to say – but without him, there wouldn’t be any light.

First a gymnast, then a dancer, one of Béjart’s former protégées, he was forced to make a career change when he started having back problems. Oswald coordinates the many different aspects of the technical team: both general director and artist, he is involved in everything – sound, lighting, set design, safety, – but what really fires him is the lighting that embellishes the ballet and enhances the leading dancers.

“When you’ve been a dancer yourself, it’s a lot easier to train the light where it needs to be. Arabesque, pirouette, entrechat…I read the dance!”

Then there are those who outshine the light. Claire Lonchampt and Mickaël Conte who play Beauty and the Beast, have been with the Ballet Biarritz since 2011. Having trained with the best in classical ballet technique, Claire with the Zürich Ballet and then with the Finnish National Ballet and the Het Nationale Ballet, and Mickaël with the Ballet Biarritz Junior then the CCN – Ballet de Lorraine, found something here they had never had elsewhere: freedom.  “Thierry gives us free rein to experiment,” Mickaël explains. There’s a creative relationship with the choreographer,” adds Claire, “a sort of osmosis that takes place between Thierry’s thoughts and ideas, and the way our bodies respond to them.” But under no circumstances does Malandain have the dancers improvise as in modern ballet. He scripts the movements and his work method, as for any ballet, is based first and foremost on the choice of a musical score and a subject. That’s how he set this highly theatrical ballet of narrative action to the pages of Tchaïcovski’s symphonies, where the Russian composer “lets his soul flow out as the lyric poet lets his soul flow out in verse (2)”. Just like the master of harmony, for each one of his ballets and perhaps even more so for this one, Thierry Malandain removes his mask, showing his audience the portrait of a learned man and an injured artist. Because behind the unhappy beast (powerfully interpreted by Mickaël Conte), created by Mme Leprince de Beaumont, and with references to Cocteau’s original film, hides not only the artist’s face, but also his body and soul, grappling with creation, tormented by his inner demons. For the choreographer, everything is there, in this initiation story that seeks to resolve the duality of human existence. Perhaps that’s why when asked whether he would define himself as beauty or beast, Thierry Malandin answered “beast I would say.” Just before adding with an amused smile: “beauty takes pains.”

(1) Violette Verdy: one of Balanchine’s principal dancers at the New York City ballet, Director of the national Paris Opéra ballet.
(2) Tchaïkovski, in a letter to Nadejda von Meck, dated 5thDecember 1878.