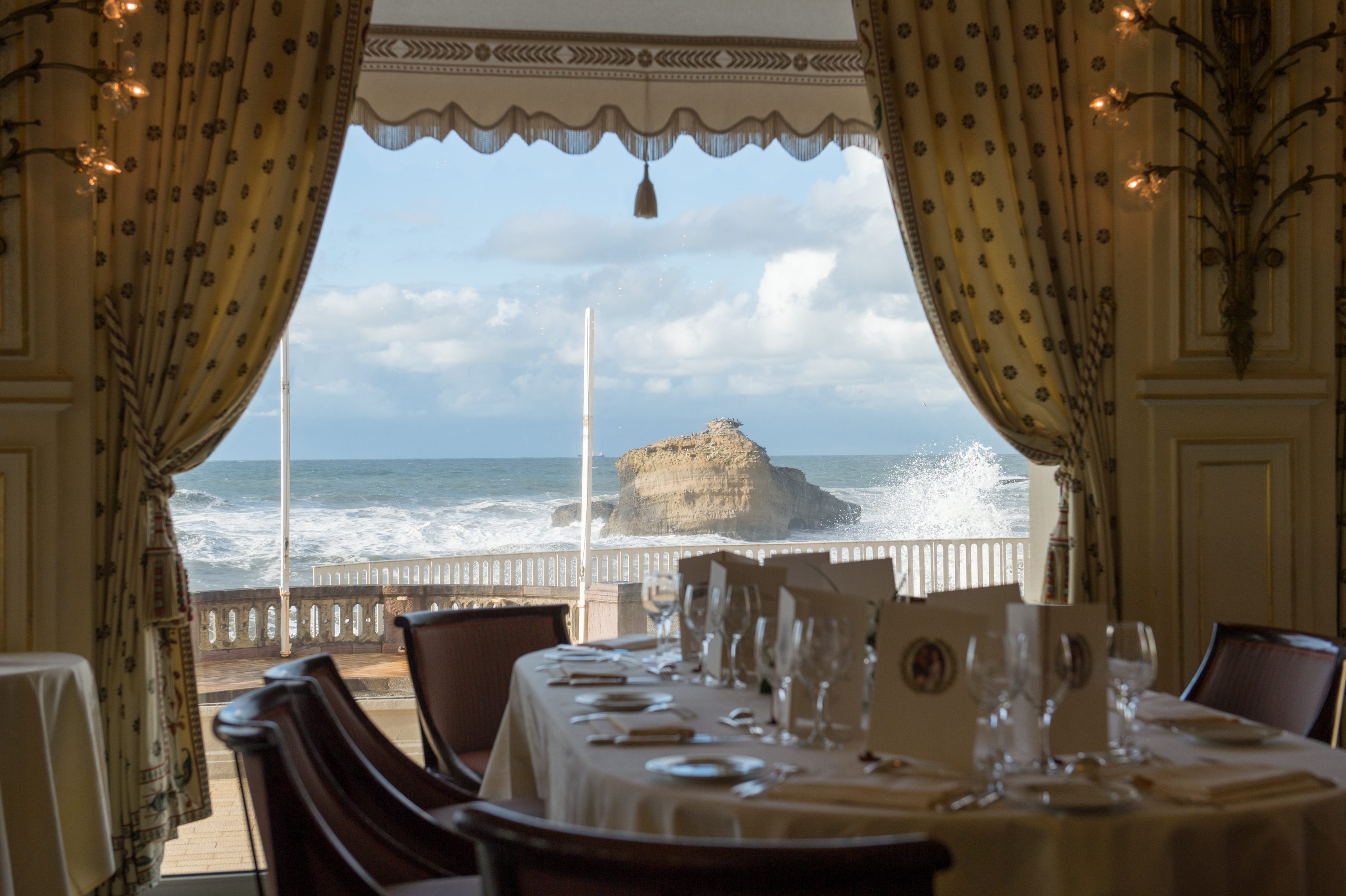 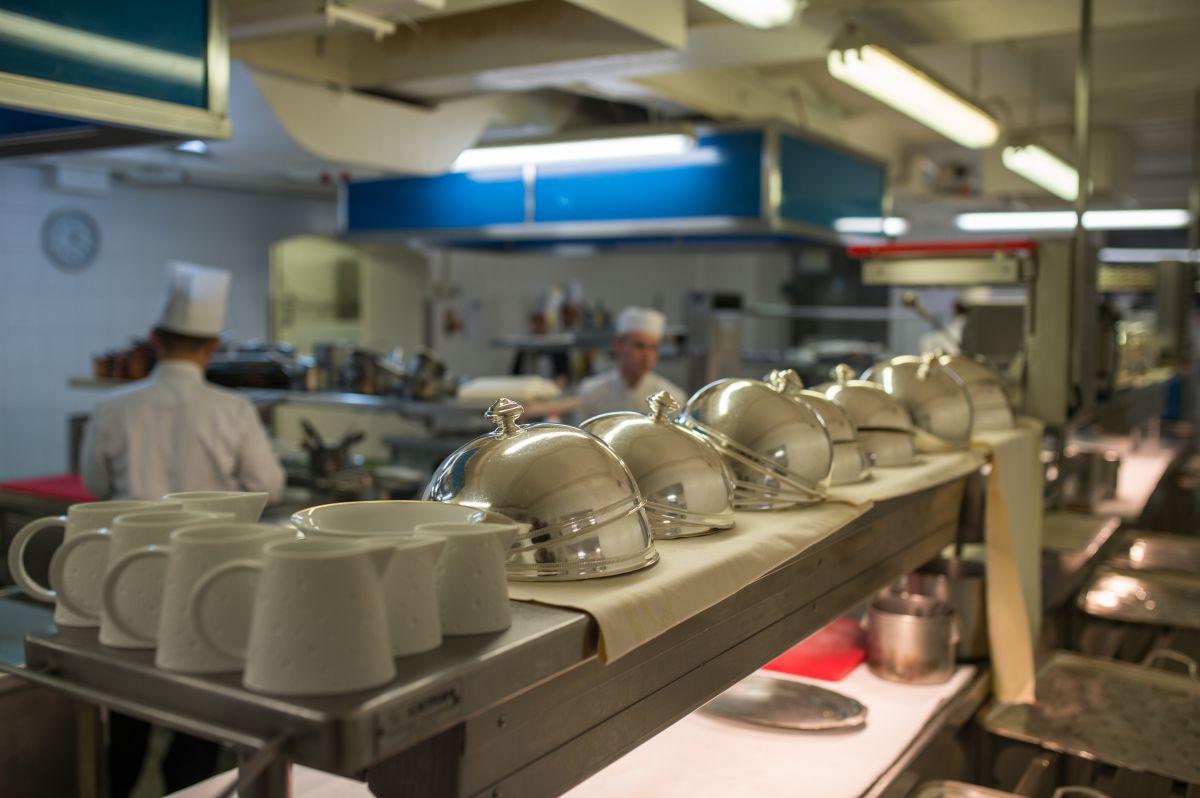 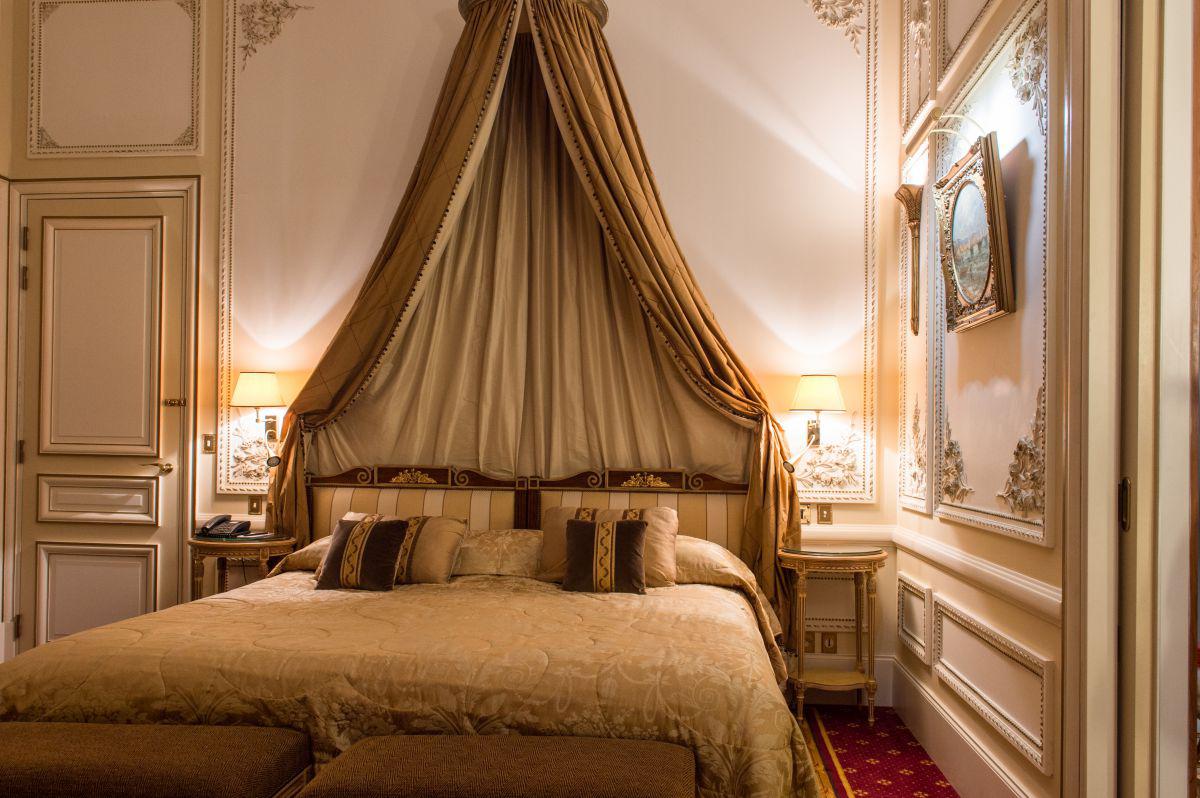 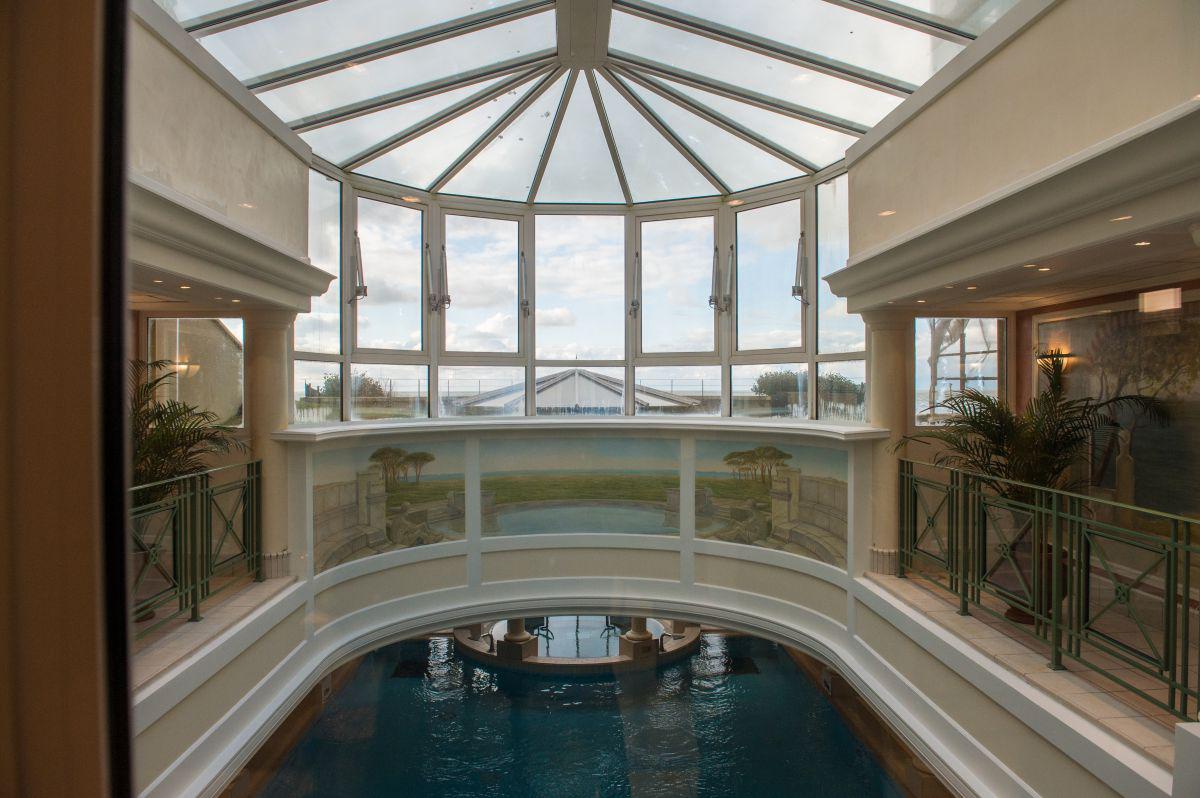 In the image of Biarritz, Hôtel du Palais a bridge between home and abroad. A kind Grand Budapest Hotel, or bling- bling, or hast thou seen. Iodinated palace, rooted in the nineteenth century and surfing the trends of today. To dive into this place so particular, it must follow the thread… Eugenie.

At the Palace Everything is imbued with the soul of the Empress. Eugenie… The inspiration by which Biarritz, former whaling port, would never have become the beacon of elegance and visit the Great of this world. July 28, 1854, we learned in “Le Messager de Bayonne”, that the Emperor Napoleon III and his young wife were coming for a month and a half to breathe the fresh air of the ocean. The young couple did not come here by chance. Eugénie de Montijo, born in Granada 5 May 1826, tastes from childhood tonic bathing in the Basque coast. The holidays are completed but the emperor is also enchanted by the charm of the coast and bought a plot of 10 hectares where he built at great expense, a sumptuous villa on the sandy hill facing the waves and rocks. A shaped building “E” as Eugenie. Erected in ten months, it will be the Villa Eugenie, who later became the Hotel du Palais. A privileged place of residence for European royalty and Russian aristocrats. At the end of the nineteenth century, the Russians in the jet set are so many Biarritz to a quarter of the population of the city speak the language of the Czar! A few years later, in 1880, the Villa Eugenie began her second life. First becoming a casino named “Palais Biarritz” and by transforming into hotel in 1893.

The second empire left within these walls his stunning impression.

It still feels today at every step come in this great luxury liner docked at the beach. Upon arrival, the revolving door we projected in the columned hall with majestic chandeliers and invites us to go back in time. The immutable and precise ballet staff wants discreet. Opposite the entrance, we find the restaurant Villa Eugénie shaped rotunda with high ceilings and impressive columns. Alain Ducasse says it is the world’s most beautiful dining room. It is true that some here endures timeless atmosphere, unique.

“When I arrived in this place full of history, says Jean-Luc Cousty, general manager for a year and former CEO of the Hotel Lutetia, I felt a lot of fun. This is a hotel that flatters the ego. It is a place of magic. The staff is a natural kindness and the ability to move forward.”

Keeping in mind the exceptional past of the building, the objective of this man of challenges is to support and build the future of the iconic Hotel:“I have the advantage of living here, and see gradually what is missing. A palace is above all men, a team, a family of up to 350 people in summer. The difference with other palaces is that we are in a resort principle”. True to the tradition of the art of French living, the Hotel du Palais cultivates its history and uniqueness. Result: 100 rooms and 50 elegant and refined suites in the style Second Empire and Louis XVI. In the suites, Burmese teak, Carrara marble, Italian glass paste mosaics offer a vision of a noble and precious luxury. Some of them bear the names of personalities who graced the hotel of their visit or their writings: Garry Cooper, Romy Schneider, Edmond Rostand, Hemingway, King Farouk or the Duchess of Windsor.

Special feature: the Palace Hotel has its own workshop in the center of Biarritz. A large shed where cabinetmakers, carpenters, painters and decorators, upholsterers and tailors work in perfect harmony to sublimate this living legend. Here, far from the pomp and Romain Philippe, cabinet makers, are responsible for the repair, maintenance and hunt all the Napoleon III furniture. “It is the little hands of the Palace”, they joke. “With all the artisans, we decorate and restore ten rooms per year. There are no assigned designer, which sets the tone of a room, the fabric!” This is the thread decoration. “Our DNA is the Second Empire underlines Maryse, seamstress, upholsterer, but we add modern touches. The objective is to magnify the room.” With Christophe and Sophie, they tackle everyday to keep curtains, cushions and bedspreads, connect the grounds of tissues while combining ancient and modern. The workshop of the Palace Hotel works primarily with embroidered silk and hosts twice a year tissues publishers to select the best pieces to be used to beautify the hotel. Lionel, meanwhile in real magician, works false marble and false wood, patinas and gilding: “It’s all in the art of mastering the trompe l’oeil” says painter-decorator, master of illusion.

This specific tailor-made is also in kitchens and dishes prepared by Chef Jean-Marie Gautier, head of the three restaurants of the Hotel Palace, the Villa Eugenie, a Michelin star that draws its inspiration “Entre terre & océan*”. For him, cooking is a love story. Like that linked Napoleon III and Eugenie, watched where he works. As empress, the chef is a tourist model and loves patronize small markets, to meet the fishermen moored on the banks of the Adour, and take salmon or shad. Asparagus, Espelette, Basque pork, peas, foie gras, chanterelles, porcini, truffle … are all ocean and local produce magnified by the chef and his team. A brigade – up to 45 people in summer – who calls it “hard but fair leader”. Laughing eyes, calm and careful, Jean-Marie Gautier agrees: “I can not miss someone without making it a point, it’s my nature!” A never satisfied very kind attached to the eyes of demanding customers, half French, half alien,“I put myself in the place of the visitor. When it comes aperitifs, lunch was at the pool or celebrate an event in the Imperial area, it has to be at the height of what is expected of a luxury hotel.”

“Here, we are not in seem. You have to break some codes , move with the times , enjoy the energizing spirit of the ocean and we offer this earth.”

This desire to give pleasure, to immerse ourselves in a cocoon of luxury and pleasure, is the quintessence of the Hotel du Palais. Thus, in memory of the taste of the Empress of swimming and well-being was born in 2006, the Imperial Spa. A haven of 3000 m2 spread over five levels, in collaboration with Guerlain. Eugènie chose the brand to create his own cologne «The cologne Imperial». She would have loved it, facing the Ocean, dip in the indoor swimming pool surrounded by colonnades and swim against the current! Voted best hotel spa in Europe & Mediterranean, the Imperial Spa is dedicated to the beauty of the body, face and hair, physical health, wholeness. A wide range of treatments and varied to de-stress, draining, firming, detoxifying, balancing the yin and yang … and not exclusively for hotel guests. Overlooking the sea, the fitness center on the top floor hosts a Pilates studio and weight machines and cardio hightech. Customized sessions are held with the presence of coaches fussing which also offer boxing, aqua bike, or paddle surfing for sports family. «We must demystify the palace side, concludes Jean-Luc Cousty, reconcile luxury service mind and relaxation. Propose different activities, create partnerships with.