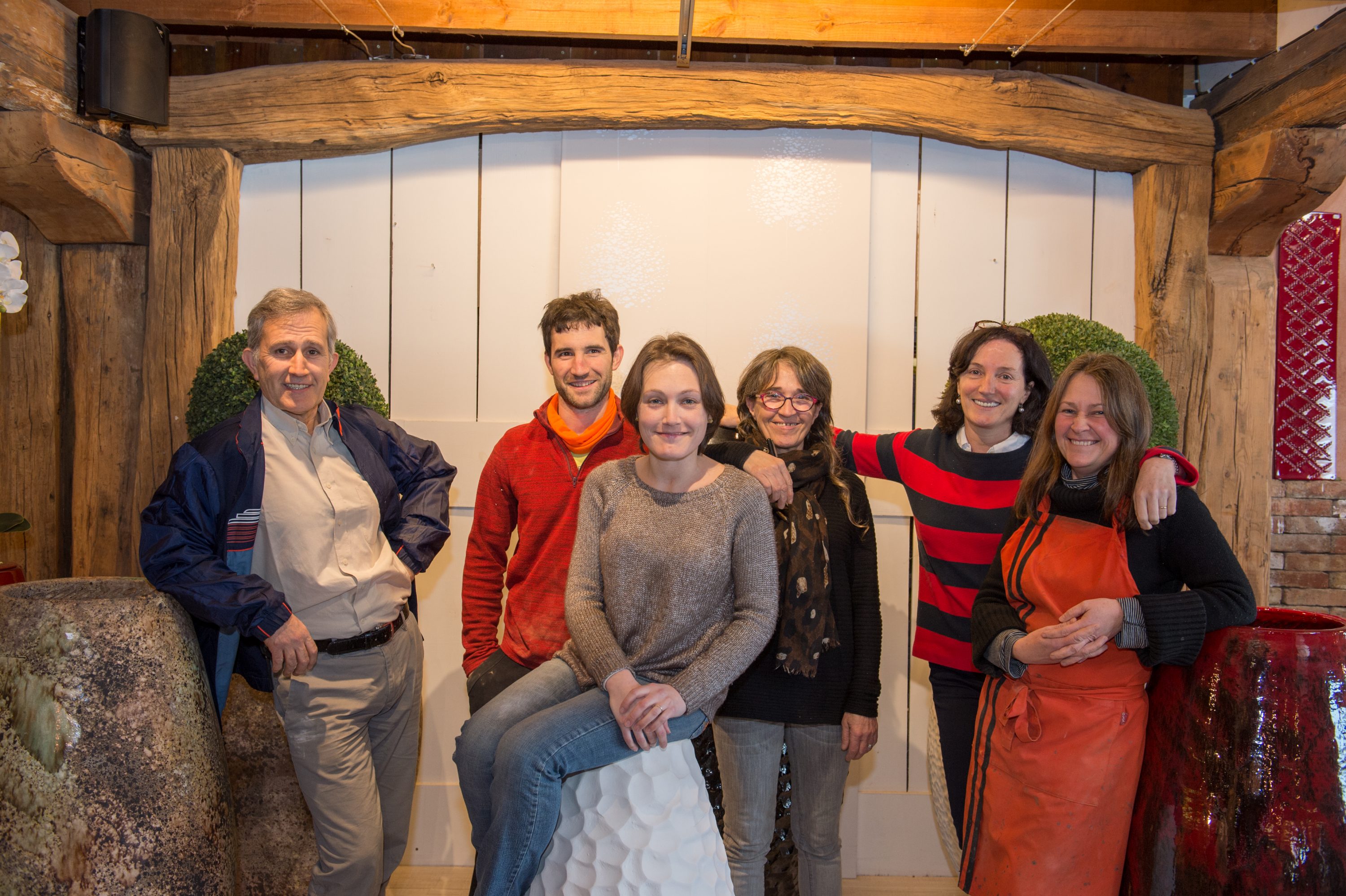 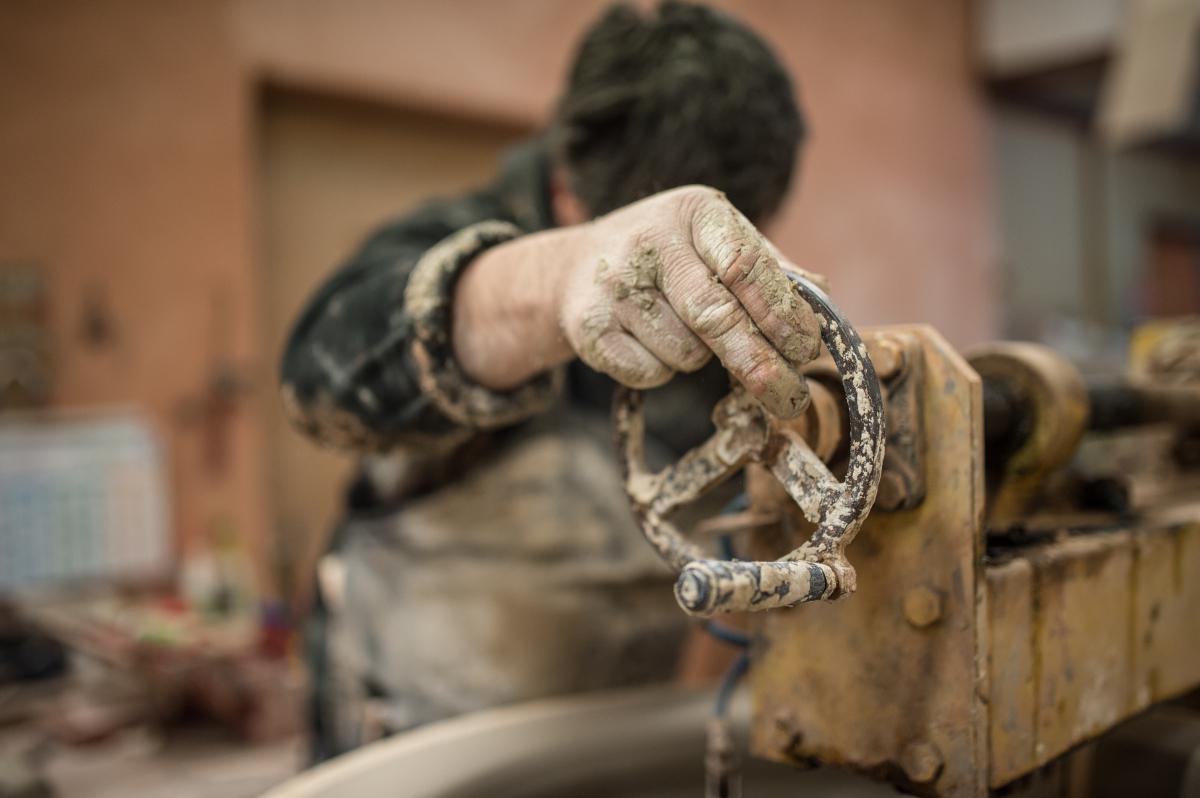 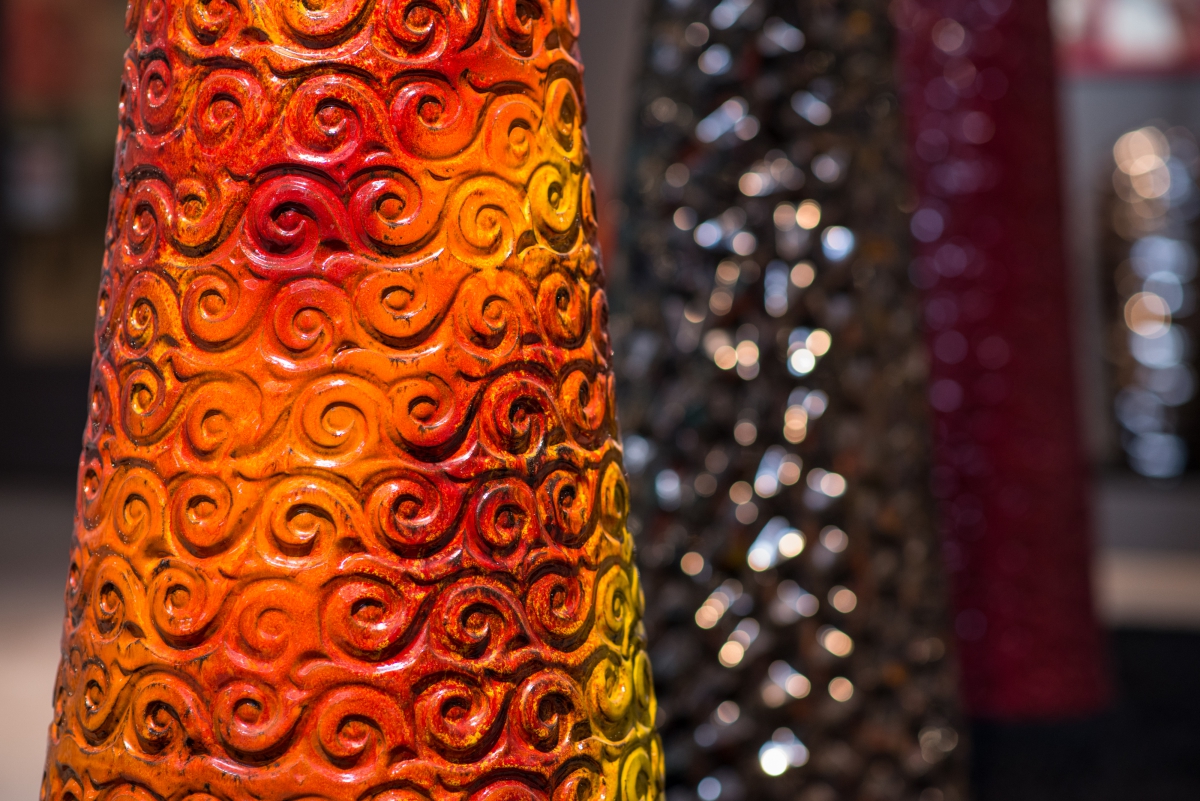 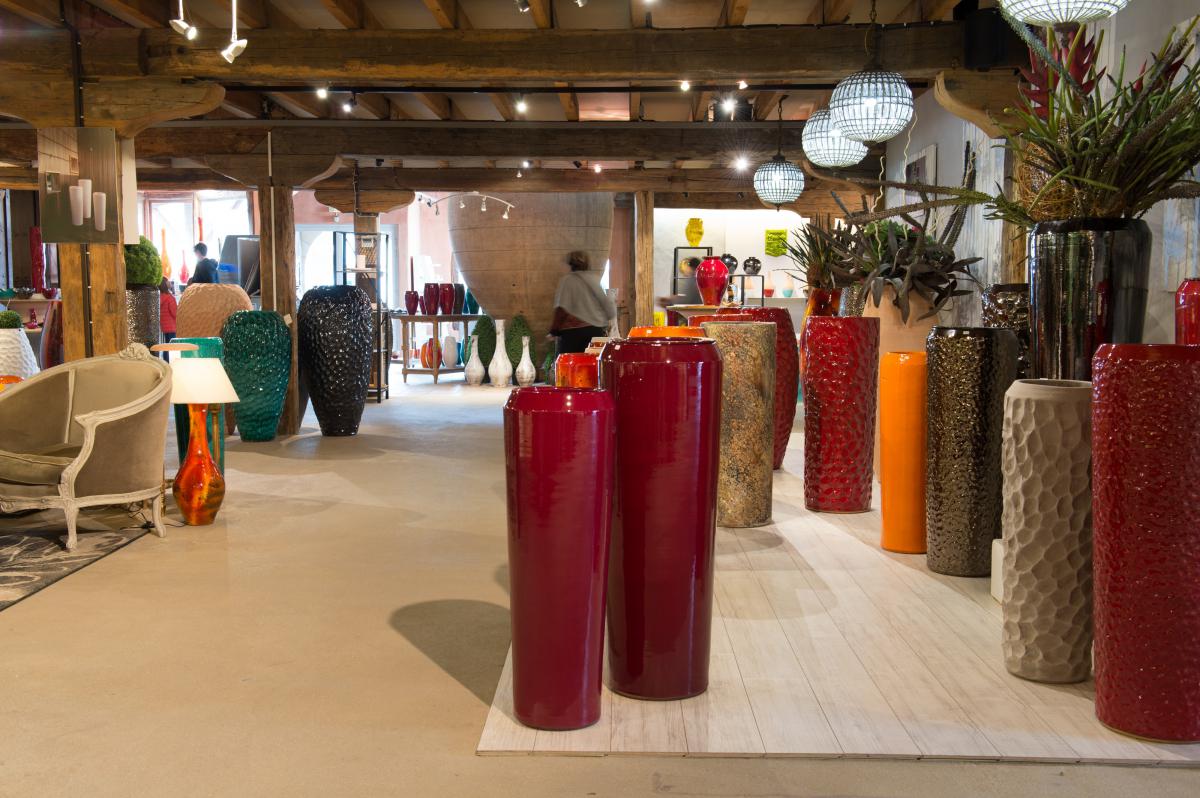 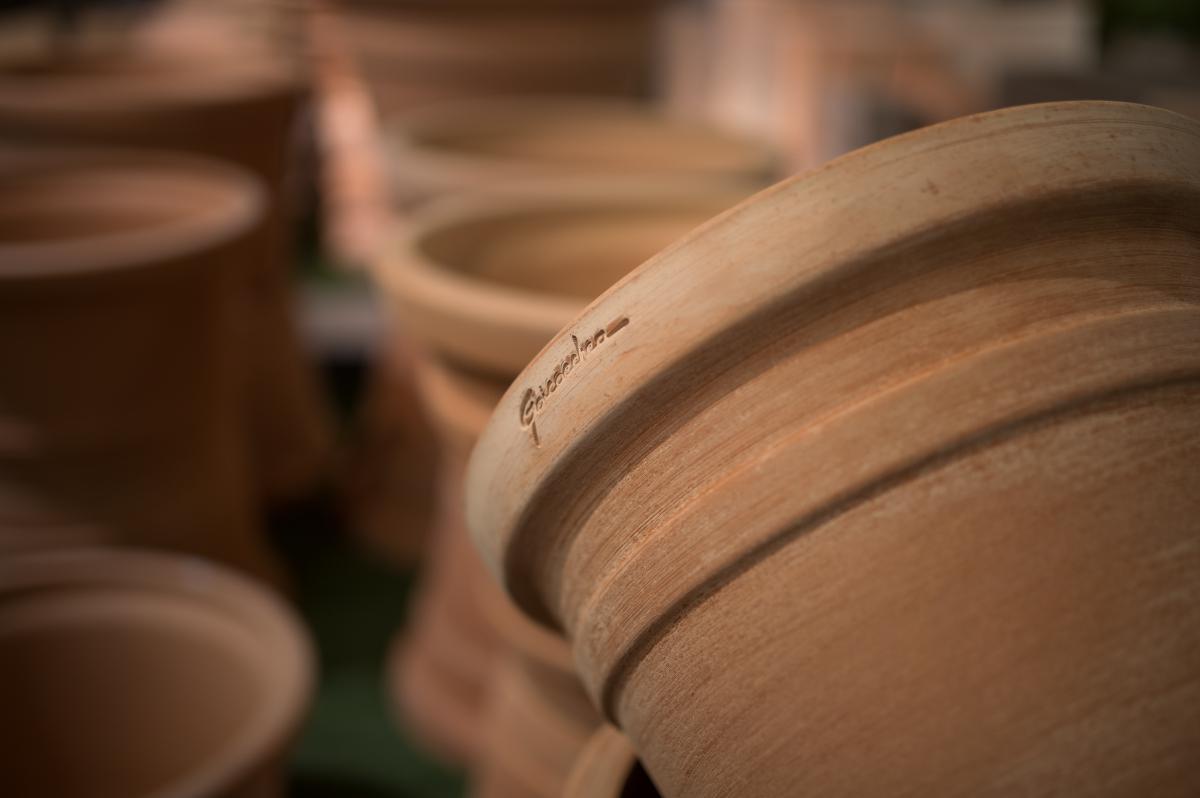 Fired up for success!

When you meet the Goicoecheas, it’s as if capturing the earth and taking hold of its soul to transform it is a way of uniting them with the world. For all those who thought that pottery had fallen into abeyance, just simply entering the majestic cavern of their workshop in Ossès is enough to realize that in their hands, clay has not had its final say.

“The finest architect is not the potter, but the one who created the Earth, the landscape, the mountain ranges. Nature is a wonderful source of inspiration!” Inaki Goicoechea is proud. Proud of his country, and of this small Basque village in Lower Navarre, just a few kilometres from Saint-Jean-Pied-de-Port, dominated by the summits of Iparla and Baiguara. It was here that his grandfather, Jean-Baptiste, created the Goicoechea Pottery, now managed by his father Michel and his mother, Terexa, both assisted by Inaki himself and his sister Maïtena. There’s a kind of atavism in the Goicoechea family. They don’t all have their hands in the clay, but the earth runs in everyone’s blood. “Everything began with my grandfather,” explains Michel, Inaki’s father. “He grew up as one of eight brothers and sisters. He was the son of a farming couple in Navarre and he got his first job in Banka, 20 kilometres’ walk from his home. It was in 1918 and he was just 18 years old. He became a coal merchant and delivered to the region’s farms. He was already involved in firing! He started his family in the village and then became a woodcutter. Later on, with his son Jean-Baptiste (my father), he cut wood in the mountain forests for a sawmill that made railway sleepers, planks and boards, and the rest of the wood was delivered to a brickworks on the border between France and Spain.” It was at that time, right at the beginning of the 1950s, that Michel’s father discovered bricks and pottery. A time when, with the arrival of new machines and materials, the SNCF decided to limit the production of wooden sleepers. “There wasn’t really much work anymore. The guys from the brickworks asked him to start marketing bricks and brick objects. Then he came up with the idea of developing garden accessories and flowerpots in particular. He went into partnership with the managers of the brickworks and ended up buying a clay quarry in Spain.” That’s how the Goicoechea Pottery came to light in 1960, spearheaded by Jean-Baptiste and his wife, Céline.

In the name of the father, the son and the holy family…

“I started working in the village with my father, and that’s how I met my wife.” Terexa was studying economic sciences, but it was her artistic side that won Michel over. “I wanted to be a cabinetmaker,” she says smiling, “but my parents said that it wasn’t a profession for a lady!” They fell in love at first sight, Michel introduced her to the patriarch and Terexa soon became part of the G. family. The pair of them hit the road, just like Michel’s father did, to go and visit clients. Determined to keep the company in the Basque country, together they breathed new life into the family business: “By listening to our customers’ needs, and looking at what was being done elsewhere that we started to develop the production of flower pots for outdoor plants,” explains Terexa. “We felt that what people wanted were sophisticated contours, pure, sensual, feminine curves. So we began to design new collections somewhere between classical models and modern shapes.” The couple complement one another perfectly. They started out in the profession together and Terexa confesses that she put her heart and soul into her work. “The material is fascinating. It moves me. If you are someone who is accurate, sensitive and creative, then it’s a real delight to work with.” Michel and his wife managed to convey their enthusiasm and open-mindedness to their children.

“They paved the way for us,” says Inaki. After studying to be an electro-technician, then taking courses in industrial ceramics and “a few, extremely instructive journeys,” he now manages the design and production of the different collections. An experienced, multi-talented man, he leads the entire workshop. For him, “Freedom is our family, we don’t have any shareholders, and our customers are loyal to us!” His sister Maïtena, who began a degree in international commerce, spent a year in England in a garden centre owned by the Truffaut group, then once she had her Master’s degree in import/export under her belt and was fluent in four languages, she created the export department and also manages international projects and work sites, in particular for luxury hotels. “My only regret is that I can’t travel with the ceramics when they leave in pallet-loads to the four corners of the world!” Not forgetting in this sagrada familia, Michel’s two sisters, Babeth, specialized in enamelling and decoration, and Dominique, who manages the boutique in Saint-Jean-de-Luz.

“Man is at the heart of the elements here!”

Around the Goicoechea family nucleus currently gravitate about twenty employees in the Ossès production workshop and another ten in Navarre, in the workshop next to the clay quarry.“We always strive to ‘do better”’. If we want to be innovative, we have to preserve the harmony and integrity of the people who work for us. We would be nothing without our team.” And this team comprises about ten carpenters “because a good carpenter makes a good potter” affirms Terexa. The reason becomes obvious in the massive work rooms on site where the huge wooden moulds are arranged, specially designed for the larger earthenware range.

“This wooden structure is used as a support when making the earthenware jars,” explains Jano, who has over thirty years’ expertise in the rope technique. So what’s the rope technique? “It’s our most spectacular pottery-making method,” Inaki enthuses. “It’s an ancient (editor’s note: and secret) know-how and it took us over a decade to get it perfect!” Jano, who is an old hand, shows Iban, Terexa’s 25 year-old nephew, how to do it. “He’s going to take over from me when I retire,” Jano explains with some emotion. A long, thick ship rope is wound around the wooden structure. “It acts as a framework for the clay. The rope has to be kept taught and well pressed in, because it’s the tension that keeps the clay in place.” Next, with accurate aim, just like in the game of Basque pelota, Iban throws balls of clay so they stick uniformly around the rope. “Applying the clay, keeping it moist and smoothing it down are the key steps in forming the pot,” Jano confirms. Drying these large items of pottery is a delicate operation, as is the firing that lasts several days. There is a crucial step to keep the shape: removing the rope. The potter has to regulate the strength he uses to hold the rope, it’s a very complex move. “If you pull the rope away too fast, the whole thing collapses! And if you don’t pull it away fast enough, the clay doesn’t regain its natural elasticity and there’ll be a big crack in the finished article” Jano explains. So for the unmoulding process to be successful, the rope has to be removed over several days as the pots are drying. Then comes the final stage in the process: firing the jars in the giant 10-m2 kiln. Several employees are there to check the settings. Eight gas burners are lit to raise the temperature of the pottery up to that of molten lava in less than an hour. After that, the temperature is gradually decreased: “It’s at this stage in the firing process that everything is transformed,” Terexa explains. “The kiln heats up to 1,030 degrees, and then little by little, as it cools down, the clay becomes terra cotta. When we fire up the kiln, it contains a lot of merchandise, which means a lot of money, and we’re always a bit on edge.”

As you can’t stop progress, the prototypes are designed using 3D software, but for the G. family, the human factor is of the utmost importance. “Yes, we have technology, but more importantly, we have the know-how! We’re probably one of the last strongholds in the world to resist the digital wave, because we’re not going to let a machine tell us how we feel!” laughs Michel. Nothing is on show here unless it is perfectly finished: “in our products, it’s important for the curves to be harmonious. When we are designing something new, we ask the whole team to approve it.” This working together approach is crucial, whatever kind of earthenware is being made, whether it’s the 70% that are sold to garden centres like Jardiland or Truffaut, or the 30% purchased by architects, landscape gardeners or luxury hotels and mansions. “We can’t just make luxury items,” emphasises Michel, “we have to keep the business going!” With 400,000 items made every year, and some 10,000 tons of clay, there’s no doubt that the Goicoechea Pottery, awarded the Entreprise du Patrimoine Vivant label from the French Ministry for the Economy, Finances and Industry, is a great success story. Their ceramics have crossed the oceans and stand proudly and elegantly in the most luxury hotels in the world. On the Basque coast, their imposing earthenware jars, combining different textures and coloured enamels, can be admired at the Régina Hotel and the Hotel du Palais in Biarritz, or at the Grand Hôtel in Saint-Jean-de-Luz. Their range of rose-ochre or azure-grey ceramics, a homage to elegance of the raw material, is on display in their new boutique and former home to the late Louis XIV, in Saint-Jean-de-Luz. “All our earthenware objects are an aesthetic representation of the natural environment that surrounds us. When we create an object and take it through to completion, we feel like we’ve moved mountains. But we have to stay modest,” Michel concludes. His son Inaki however, has other ideas. He would like ceramics to be recognized as an art, “so that one day it can have its rightful place in a gallery,” he says, his eyes sparkling with zeal.